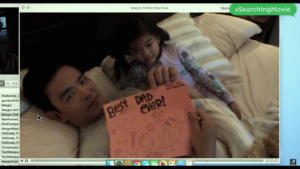 Director Aneesh Chaganty’s new movie Searching is the latest in what some refer to as the Screenlife medium. In this framing, the entire movie is presented through a computer screen, in the vein of the two Unfriended movies (indeed, the three movies share a producer). This particular story is about David Kim (John Cho), a father searching for his daughter Margot (Michelle La) who has gone missing. Along the way, David has to come to terms with how much his daughter has kept from him.

This movie was fantastic. Spoilers and more below the cut

One of the biggest factors in how one would judge this movie would be their reaction to the format. Unlike the other Screenlife movies, this one takes place over several days and has a variety of formats: the displays on a laptop, an iPhone screen, news footage, Youtube video of a physical altercation, etc. Having seen the first Unfriended movie and this one, I have no personal issues with this mode of presentation but I respect that many people do have issues with it and I am uncertain if the variety of perspectives offered here would improve upon those.

The major issue I had with this movie would be the ending twist. Near the end, the case appears to have been wrapped, with Margot being killed by an ex-con who released a confessional tape and then killed himself. Due to this suicide and the treacherous terrain where the incident would have happened, her body may never be recovered. However, David stumbles upon some circumstantial evidence that suggests otherwise, such as the officer leading the investigation (Debra Messing) having known the alleged killer and having volunteered for the position instead of being assigned to it as she claimed.

The final conclusion is that the officer’s son accidentally knocked her into a deep treacherous valley and missing any signs of her survival. He panicked and called his mother who decided to cover it up to protect him, first fabricating evidence that Margot ran away and then forcing the ex-con to confess once her car was dredged out of a lake. I wasn’t sure how necessary this reveal was, having been content with a random stranger committing the act and knowing that the body is often never found. Sad to say, not every missing person’s case has an exciting story or a satisfying ending.

With that out of the way, there is a lot I liked about the movie. The rest of the plot unfolds quite well, with its gradual reveal of foul play and exploration of several avenues and suspects flow quite well. The actors all do a fine job of selling their roles, especially John Cho who often has to convey emotion solely through subtle facial motions and body language. Related to that, the film-makers do a great job approaching the challenge of communicating David’s thoughts using only the tasks one can do with a mouse.

The emotional throughline of the movie is well developed. The starting point of the divide between father and daughter starts with the death of David’s wife and Margot’s mother, Pamela, and David’s inability to discuss or even mention Pam to her. This leads to Margot seeking out her uncle when she wishes to discuss her life and keeping things such as her quitting Piano from him. David’s investigation forces him to discover and acknowledge the gap between them and, after Margot’s safe return, he seizes his chance to start bridging this gap.

This movie is a definite recommend. A mostly satisfying plot, engaging characters that are well-defined, and a movie that never descends into depressing seriousness all contribute to a worthwhile hour, forty-two at the theatre, so long as one can get past how it is presented